6 Critical Reasons to Use an Antivirus with EDR Capabilities 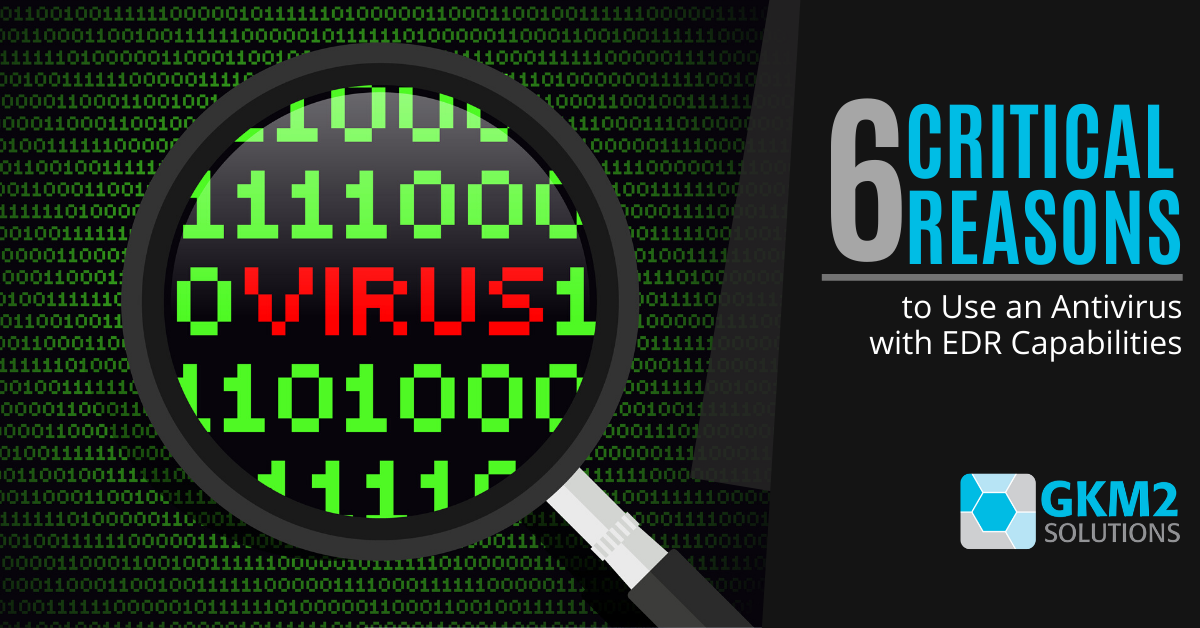 Antivirus software has been around almost as long as computers themselves, tracing their roots back to the 1970’s. And just as threats to computer networks have evolved from simple viruses to sophisticated malware in multiple forms, so has the antivirus protection solutions designed to detect and deter them.

There are on average 7,000 to 8,000 malware infections and vulnerabilities reported to the Australian Cyber Security Centre every day. Many of these are what are called “zero-day” threats which are newly released and have not yet been cataloged in any known threat database.

The advanced nature of today’s malware, which includes viruses, ransomware, spyware, and more, has far surpassed the capabilities of standard antiviruses. This is why EDR (endpoint detection and response) has become the next level of antivirus protection in any strong network security plan.

Endpoint detection and response, EDR for short, is a solution that is designed to constantly monitor and respond to any threats to your endpoints (any device physically at the endpoint of a network, such as a computer, smartphone, printer, etc.)

EDR does much more than just match a suspicious file to a known threat database, its advanced recognition capabilities allow it to detect suspicious behavior, identify patterns, and detect anomalies. This allows the tool to detect even zero-day malware that hasn’t been seen before because it’s looking for the behavioral patterns of any type of malicious code.

Antivirus programs that include EDR become “smarter” as time goes on. This is because they’re storing all endpoint events in a centralised database that can be analysed in full and used for threat investigation and reporting.

The Benefits of using EDR

Antivirus (AV) solutions without EDR are limited in what they can detect. Two types of attacks that they’ll typically miss (but EDR will catch) include:

The most dangerous threats to companies are zero-day and fileless malware attacks.

According to the “2018 State of Endpoint Security Risk Report” sponsored by Barkly, there’s been a 20% increase in endpoint attacks in 2018 over the prior year. The cost to small and medium businesses of these attacks are as much as AUD $1,100 per each endpoint.

Here are the important benefits of using an antivirus solution with EDR included.

Because EDR monitors in real-time, you’re alerted immediately if any threats are detected. This is helpful because it means you can stop an attack right when it’s starting before it ends up overtaking your entire network.

That early response capability can mean the difference between suffering a data breach that compromises sensitive information or having the ability to stop the threat before it reaches your data.

Because antivirus with EDR looks for suspicious behavior, it has the ability to catch all threats to your endpoints and network, even the most advanced – like fileless and zero-day attacks.

This type of detection is also the best way to detect the malware of the future since the focus is put on what something may be doing to your computers and other endpoints, so anything that acts suspiciously is instantly flagged.

EDR solutions are collecting data 24/7 from continuous monitoring, including data specific to all your endpoints. This allows for in-depth and robust reporting that gives you full visibility into any network vulnerabilities so they can be fortified.

Because EDR solutions are cloud based and designed to protect your entire endpoint perimeter, you won’t have to worry about a tablet, printer, or other device being left out of your antivirus’ ring of protection.

EDR solutions focus specifically on the endpoints, which is the mode of entry malware typically takes to infect the entire network. This helps ensure a secure perimeter and that each and every endpoint is being monitored.

Find Attacks that May Have Gone Undetected

Not all malware announces itself, and many types are designed to fly under the radar undetected. EDR offers an additional layer of detection capabilities beyond what an antivirus alone can do.

This means that an EDR solution can potentially find attacks that may have gone unnoticed by searching for what’s known as indicators of compromise (IOCs).

The automated capabilities of EDR allow for a faster response to potential threats to your network and data. For example, EDR can isolate endpoints on demand, immediately cutting off the threat from moving further throughout a network.

When it comes to threat investigation and response, using a tool with EDR moves the process along through things like guided investigations and suggested next steps and remediation tactics.

Is Your Antivirus Up to the Task?

If your antivirus solution does not include EDR, it could be missing some of the most dangerous threats to your network. GKM2 can discuss your current security software with you and make suggested to reduce your risks of a data breach.