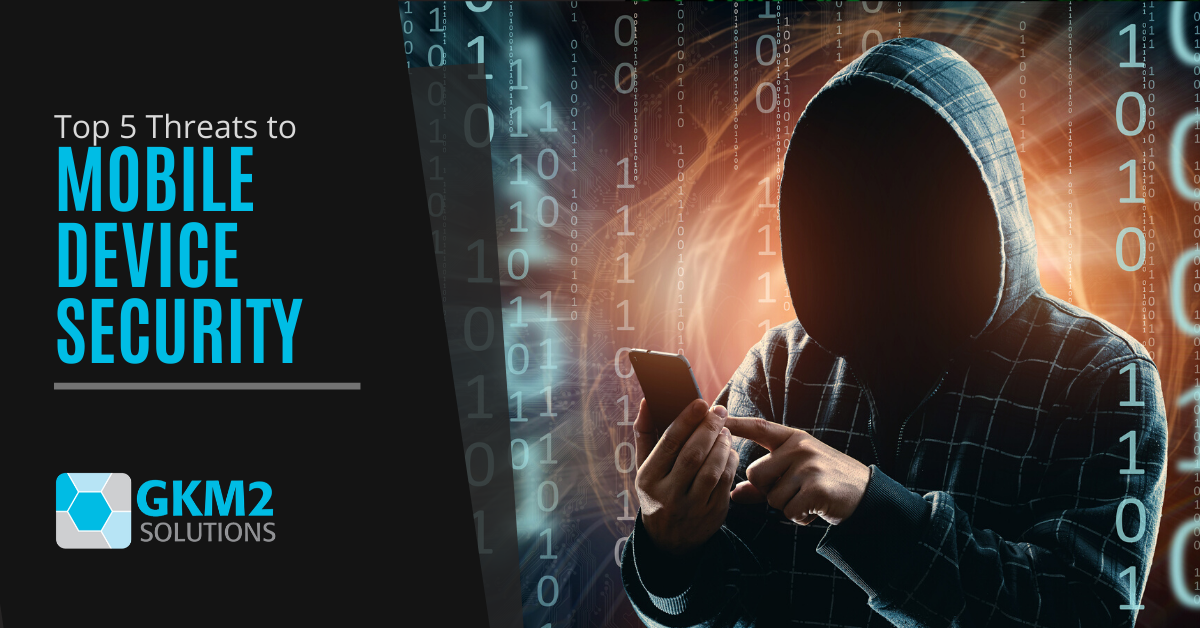 Smartphones have completed their evolution from wireless telephones to tiny “pocket computers” and statistics in a number of areas show that mobile use is outpacing desktop computer use. It seems that people prefer their portable devices to connect online over computers that are tied to a desk.

Just a few of the illustrations of how mobile devices have become our “go to” for connecting to information, both for personal and business use, include:

The significant increase in mobile device use has led to a correlation in the rise of threats to mobile device security, such as malware specifically targeted at smartphones, rogue apps that are used to collect personal data, and more.

Hackers go where the action is, and it’s currently happening through mobile devices, which makes any network security strategy incomplete if it doesn’t include mobile phone and tablet security.

Following, are the top threats you need to be aware of that are targeted at mobile phone users.

What Mobile Dangers Should You Be Aware Of?

A majority of organisations use a bring your own device (BYOD) policy at their office. BYOD helps them save money while taking advantage of the flexibility and productivity boost of working with cloud services from mobile devices. However, it does offer security challenges.

User awareness is one of the key components of any strong cybersecurity plan, so you’ll want to be sure to educate your team on the following emerging mobile device threats and how to defend against them.

Using your smartphone to make instant payments via services like Apple Pay or Zip Pay is becoming more popular due to the convenience. At least 72.4% of Australians have used a digital payment method within the last 12 months.

This has led to a rise in hacks of smartphones with the goal of accessing digital payment logins or the payment cards that are attached to those accounts.

Beware of downloading random apps or ones that are “look-alikes” to one you know. They can contain spyware that is designed specifically to compromise those digital payment systems that are stored in your phone’s data.

Even though most people know the risks of connecting to free Wi-Fi hotspots, 81% of people still do it. The lure of that connection that could increase speed from their cellular network and the ability to reduce data usage is often just too hard to resist.

If connecting to a public Wi-Fi, which could allow a hacker to spy on your traffic isn’t bad enough, a new hotspot related danger has also emerged. Hackers set up fake hotspots that are designed with names that look legitimate, like “Hotel Lobby.” These are specifically created to compromise your mobile device security as soon as you connect to them.

Ways to avoid security issues with public Wi-Fi is to use a VPN for secure connections and to make sure you know who owns the free network you’re connecting to before using it to get online.

There’s been a 50% increase in malware attacks against mobile devices in the last year. With the rise of mobile use, hackers have been designing their malware specifically to target smartphone operating systems.

Malware for mobile devices can be delivered in similar ways as those attacking desktop computers, which include:

You want to ensure that you’re using anti-malware and antivirus protection on mobile devices that can help detect and quarantine malicious code.

Another threat to smartphones are hacks that exploit vulnerabilities in mobile browsers and can redirect your webpages to either pages with advertising spam or other malicious sites.

Due to the small screens on mobile devices, users can easily think they just accidentally clicked on an ad rather than realising it’s a mobile browser exploit. If you’ve noticed that your home page has changed or your browser seems to have a mind of its own, your phone could be infected.

When sensitive information that’s on a mobile device is shared with other entities without you realising it, that’s called data leakage. It can be caused by both legitimate and less than legitimate applications.

Often apps are defaulted to the most generous data sharing features without the user being aware of it, such as applications that automatically access all your contacts and send them to a remote server.

Data leakage can also happen by accident (or on purpose) when sensitive company information is emailed from a smartphone to someone outside your organisation that’s not authorised to see it.

Be aware of permissions you’re granting when installing applications, including business apps. Employing the use of mobile device managers can also give you more security controls to protect corporate data on a private employee-owned smartphone.

Do You Have a Solid Mobile Device Security Plan?

GKM2 can help you develop and implement a mobile device security plan that ensures your data is protected and mobile devices access secured.