Can We Improve Our Network Performance with Wireless Access Points? 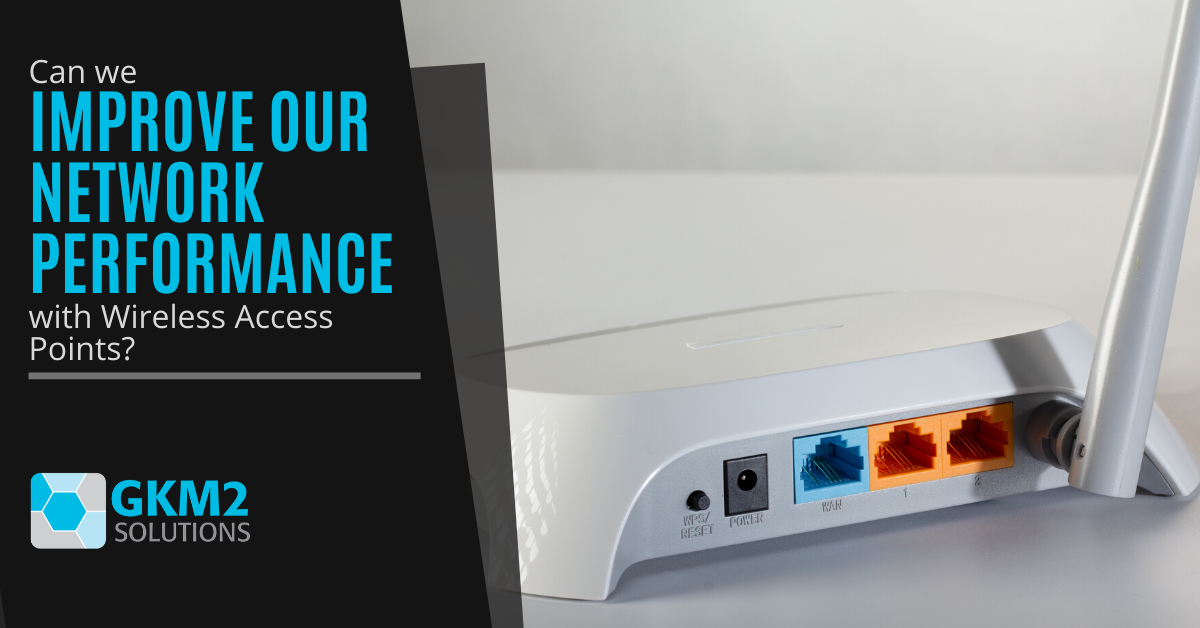 Our dependence on Wi-Fi has only continued to grow. Twenty years ago, an office might have just a handful of computers that needed to connect to their wireless network. But today, companies have multiple IoT devices, mobile devices, wireless printers, video conferencing systems, and more… all vying for the same internet connection.

The traditional way to power a network is through one wireless access point, which is the router that’s connected to your internet service provider’s modem. But as the number of devices requiring a network connection has increased, many offices are finding a single router delivering that important signal, just isn’t enough.

In 2021, it’s projected that 1 million new IoT devices will be installed every single hour.

One technology that’s come out in recent years addresses the expanded demand on business networks. This technology, known as a mesh network, relies on multiple access points to deliver connectivity, rather than just one.

Having multiple internet access points that all communicate through the same modem, allows companies to improve their Wi-Fi performance and reach, without having to purchase a new internet plan.

The wireless access points, known as nodes, can be set up strategically throughout your building or property, giving wireless devices multiple options for connecting to a strong wireless signal. If one node has a high demand, a device is simply routed to a different node that has more capacity.

Here’s how using a multiple access point mesh system can benefit your business.

When you’re relying on a single router to send out a signal to your entire office, you’ll generally find areas that are farthest away from the router have a weaker reception.

You may also have “dead zones” where the signal just doesn’t reach, which limits your use of office space, where you can set up shipping or tracking sensors, etc.

Each wireless access point communicates with each other and with the main access point connected to your modem. If you could see the signals, it would look like something like a spider web of signals blanketing your entire building.

This eliminates areas that have poor signal strength or no signal at all, giving you more freedom to fully utilize your space. It also allows the signal to navigate around interference, like solid walls or large furniture.

Each wireless access point performs like a router and allows devices to connect to it for a strong wireless connection. Devices can connect to the node that is closest to them, improving signal strength.

Nodes can also transfer traffic automatically from one to another to avoid congestion and bandwidth issues.

For example, if you are connected to the same node as your colleague, and your colleague begins downloading a large file, instead of your connection being slowed down, the mesh system will simply transfer your connection automatically to another node so you can maintain speed and performance.

Downtime is a costly issue. When an internet connection goes down, an office is typically at a standstill until it’s repaired.

Each hour of downtime costs Australian businesses between $2,000 (small companies) and $144,062 (large companies). Average repair time is between 5-6 hours.

When you’re using a single router to connect to the internet, you have a single point of failure, which is more of a risk to cause downtime. A mesh network with multiple access points mitigates downtime.

If one node goes down, you have several others that can pick up that additional traffic and keep you online until the problem unit is fixed.

If you decide to use IoT sensors in a warehouse or would like to extend wireless connectivity to a courtyard, it’s as easy as adding on another wireless access point.

Depending upon your brand, an access point can extend range generally between 1,000 to 1,600 S.F. Units are designed for either indoor or outdoor use, giving you freedom to extend your signal where you want to without a large additional cost.

Nodes used in mesh systems are small and easy to position on walls, ceilings, or on tables or other surfaces.

Because they’re wireless, you don’t have to have them hard wired and can move them for better coverage whenever you like.

They are designed to be “plug in and go,” meaning configuration is largely automatic. Their communication with each other and your devices is also handled automatically. This means you don’t have to manually go looking for the best node to connect to, the system will do this for you automatically.

If you’ve been unhappy with the speed and performance of your Wi-Fi network, a mesh network with multiple access points might be just what you need. GKM2 can evaluate your network and come up with a productive solution.

George Khalil2020-05-18T08:31:15+10:00Security, Technology|Comments Off on Can We Improve Our Network Performance with Wireless Access Points?